This post began as a letter to parents explaining the benefits of  participation in the intense and demanding World Food Prize essay contest.  From my point of view as a teacher, there are five big benefits. In about a thousand words, here is what this competition teaches our kids.

The World Food Prize/Global Youth Institute competition is underway! We thought you would like to more about the program and why we are so committed to it and so excited that your student has elected to participate.

To begin with, food insecurity—sometimes called, more simply, hunger—is a problem around the world—including right here in Indiana. Did you know that 1 in 6 Hoosiers don’t know where their next meal is coming from? That means that nearly 17% of the population of our state is food insecure.  Right here in our county, the statistic for children is even higher: 20.1%.

The problem is even worse than that in developing countries.

It isn’t that we don’t have enough food in the world—in fact, we do. But a host of factors contribute to the problem of hunger. For example, distribution is an issue in a country like Afghanistan. The US can send technical assistance to farmers in Afghanistan to help them become more efficient and increase their yield—but roads to take their produce to market are poor or non-existent. Food is wasted and people in the cities go hungry.

The problem could be land ownership. In many parts of India, women can’t own land—and research shows that when women have a stake in ownership, problems with food insecurity decrease.

The problem could be disease or drought. Here in Indiana, at Purdue University, agronomists like Gebesa Ejeta, who was awarded the World Food Prize for developing a drought-resistant variety of sorghum that thrives in Ethiopia, work to increase yields from challenged soils in countries around the world. Agricultural research can solve some of the problems that cause food insecurity, but the solutions don’t happen overnight. 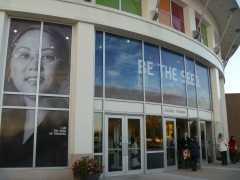 Last year, when we attended the World Food Prize Conference in Des Moines, Iowa, students had a chance to hear world-class scientists from Monsanto talk about their research. The students visited the headquarters of DuPont Pioneer and learned about the work Pioneer is doing here in the United States as well as around the world.

Participation in the World Food Prize competition is eye-opening for students. Bottom line: They learn a lot. In fact, they become incredibly well-informed about agriculture, the food crisis in a particular country, and specific solutions to the crisis.

They develop skills—especially in writing and speaking—that will serve them well in the years ahead. The WFP competition is the most rigorous writing project they will ever do in high school—and it positions these students well for the rigors of college writing. The same goes for speaking: Our kids have the opportunity to present their work orally to a panel of Purdue professors. Talk about developing confidence and poise and learning to think on your feet!  And all of this comes packaged in one-on-one coaching by the two of us: a science teacher and an English teacher.

They learn to think critically. The solutions to world hunger aren’t simple. The factors that contribute to food insecurity are complex and interrelated. Students learn to examine a problem through more than one lens and select solutions that are likely to have the most impact on the country they have chosen to study. Learning to discern a solution to a complex problem is a life skill.

They develop passion and compassion–for this topic, for world affairs, for helping people in need. They never look at the world the same way again. In fact, their passion may turn into a career, into a lifetime of work in agriculture, science, public service, international relations, engineering, governmental affairs, foods and nutrition, and a host of other related fields. Talk about opportunity!

Three of our 2013 participants spoke to the School Board last fall about their experience with the World Food Prize/Global Youth Institute essay and their presentations at Purdue and in Des Moines. The students explained what their research was about and described the impact of the program upon them. Here are the points they made when school board members asked them what they’d learned:

They didn’t use all of those words—#9, for example, came out as “I’m worried about a paper and these people are starving!” They used words such as “amazed” and “humbled.”

Afterwards, one boy wrote a downright touching email, saying he would be “forever thankful” for this whole experience. He spoke in his note about the skills he had developed and his certainty that they would follow him into college and on into his professional life. This same boy spoke at the school board meeting of the broadened vision he had gained. He had been attracted to the WFP project by his political interests, which he still has, but his takeaway was that there aren’t black and white solutions—“You have to look at the people where they are and understand their situations.” In essence, you have to appreciate the on-the-ground realities.

Or ask us! We would be happy to talk to you and answer any specific questions you may have.

Once again, we are so excited—and thrilled that your son or daughter has signed on to participate in the World Food Prize/Global Youth Institute competition. They will be winners just for participating!