It’s nearing the end of the semester. Teachers are writing final exams; students are presenting culminating projects. I’m visiting classrooms to see some of the exemplary work my colleagues and their students have been doing.

Earlier this week, my colleague Sarah Gessel and her students mounted an exhibition in the Media Center called the “Museum of Civilization.” It was a curation assignment, inspired by Station Eleven, a post-apocalyptic novel by Emily St. John Mandel that has become a staple of the English curriculum following an all-community read that our English teachers had a hand in designing.

A character in that novel establishes a “museum of civilization,” an exhibit at the deserted airport, of the world as it used to be. Mrs. Gessel wanted her students to understand how objects become symbols of individuals as well as of the collective. She wanted her students to understand that their individual dreams and ambitions, their likes and loves, their pastimes and pleasures, their actions and accomplishments encapsulate them as individuals and, collectively, characterize their generation. She wanted them to think critically about the objects in their lives that capture the essence of each of them. Here was Mrs. Gessel’s assignment:

Background: In Station Eleven, we learn that Clark is the keeper of the Museum of Civilization at the airport. There, he preserves items of the past that represent mankind before the flu.

Question: What three things would you personally put in a Museum of Civilization a hundred years from now that would represent you as a whole? You may not use a phone.

Here are some of the items students brought to school:

Some of their artifacts were poignant–a necklace made with a dear friend, now deceased; a stack of recipes from a grandmother; an old movie camera that launched what might well become a career: 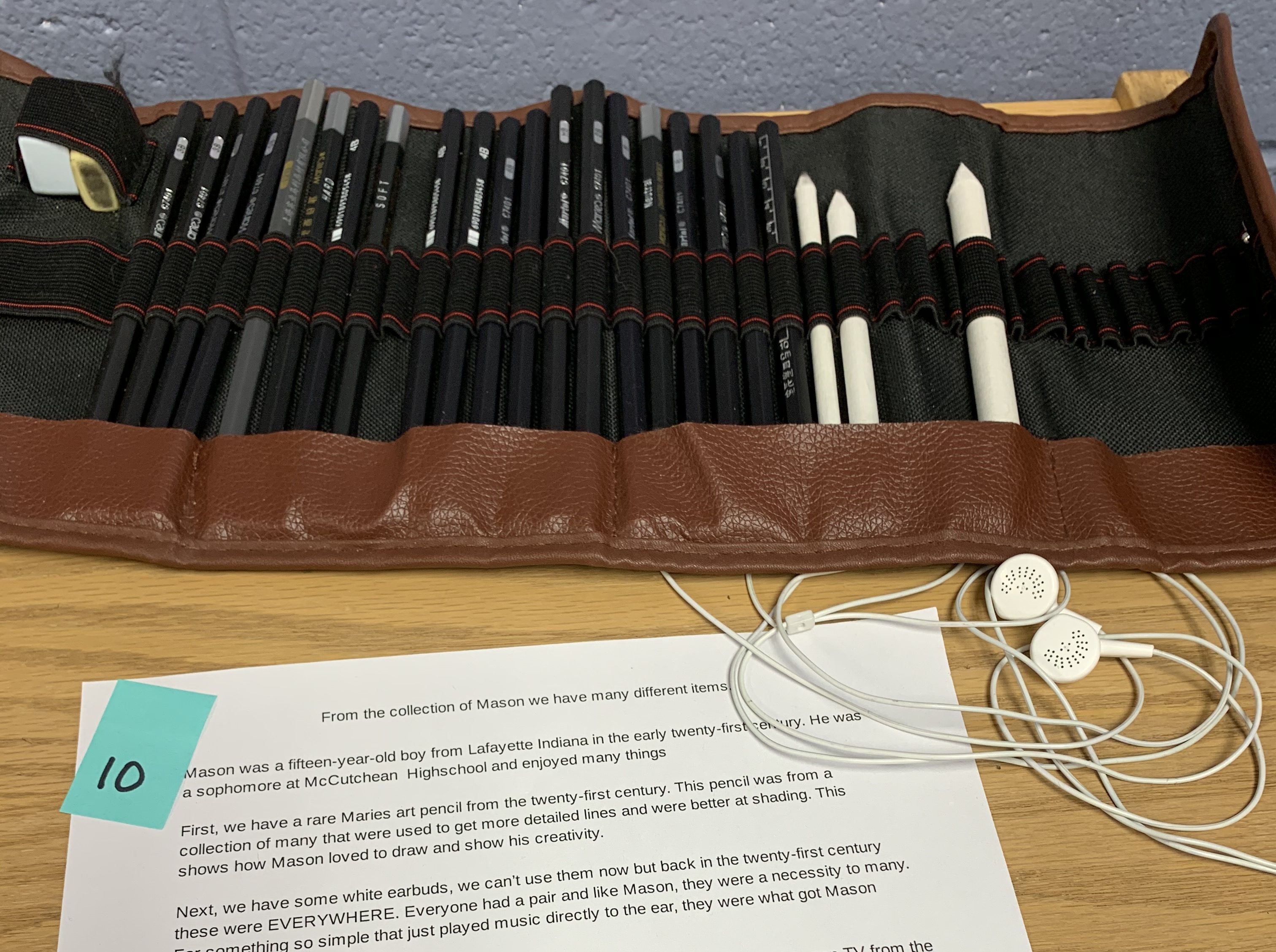 Yes, there were earbuds and screens, but not many. In fact, what I noticed in addition to the wide variety of artifacts was the overwhelming lack of electronics. Admittedly, Ms. Gessel forbade phones, but earbuds and other electronic paraphernalia did not dominate the displays. Instead, there were the indicators of family, friendship and faith. Of interest in the arts, organized sports, and individual artistic pursuits. In children, in 4-H, in books, in cooking. Ms. Gessel’s students, like most teenagers if critics would just look beneath the surface, are not the zombie-like, plugged-in and tuned-out youth so often caricatured. These are kids I want to know better, unique and interesting individuals who are going to be in charge of a world I want to live in.

And here’s what happened afterward, after the spectators left, after the voting by gallery-goers was over, after the grades were assigned: The students looked at each other’s displays and something spontaneous occurred. Here’s what Ms. Gessel wrote to me:

My heart is full as I am sitting here thinking of the time we just spent last hour enjoying each other’s company as a class. All of their “stuff” is great, but what made so many of those items in there come to life were the kids. Watching them ask each other to play their instrument or sing or dance or compliment each other’s artwork or just comment on how nice it was just to chill with each other and listen…WOW. No museum can hold that amount of wonder or life. This is why I teach and am still teaching!

If you would like to know more about curation as an instructional tool, click here to read this article by Jennifer Gonzalez in Cult of Pedagogy. 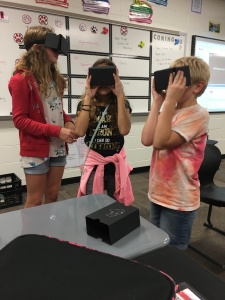 Yes, indeed. In fact, before the day I observed her 6th grade class, my colleague, Melanie Quinlisk, had guided her students through the process of writing an argumentative paper about that very topic: Hydroelectricity.

Students had researched the subject and lined up their arguments, pro and con. They’d even learned how to acknowledge a counterclaim, some to concede a point.

The day I came to class, my colleague introduced thirty cardboard Virtual Reality Viewers encased in cellophane.  On cue, students took out their phones and accessed a 360 degree YouTube video produced by Hydro-Quebec.  Ms. Quinlisk showed them how to assemble the viewers and insert their phones into the cardboard holder.  A strap held the viewers tight. Once the video began, the students were oblivious to the world around them. They were mesmerized by the virtual tour of an enormous hydro-electricity generating station in the James Bay region of Quebec (Welcome to Hydro-Quebec).

For most students, this was the first look at a 360 degree video; a few experienced ones had brought their own viewers from home.  I was there to be hands-on support, to help students access the video on their phones, secure them in the viewer, and adjust the straps.  Naturally, there was a good deal of fumbling with the mechanism of the box, and the classroom was abuzz with excitement. The students’ reactions and exclamations were punctuated by the sound of Velcro fasteners and crinkling cellophane. 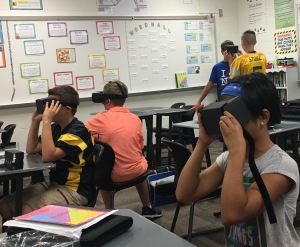 But within seven minutes, it was all over, the boxes tucked away and the students focused on their teacher’s question: “Was your opinion changed by seeing the video?  Why or why not?”

It was the “Why or why not,” of course, that she wanted to hear. And students replied using the evidence they’d researched before—quotes from authorities, statistics, facts, even the counterclaims they’d heard.

“The video explains the cost-saving,” one boy said, “but hydroelectricity is still hard on wildlife.”

Clearly his priority was wildlife, not economics.

Priorities is where this remarkable lesson went next. Ms. Quinlisk distributed a handout that listed the amount of wattage various household appliances, large and small, consume per kilowatt hour. The students’ task was to select the appliances they’d choose to use if they could use only 1000 watts a day. 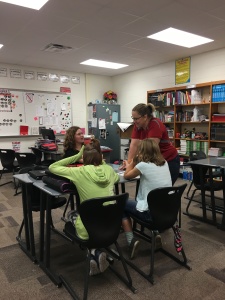 One boy went right to the heart of supply and demand and family dynamics: “Is this what it’s like to be a parent?” he asked.

The students’ priorities were cell phone chargers, TV, and air conditioning, though some were creative:

“I’d get three fans instead of air conditioning!”

“I’ll get a leaf blower instead of air conditioning.”

“Skip the stove. I’ll live on Cheetos and Cheese Whiz!” 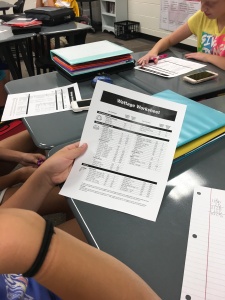 The students pondered their choices, added up their wattage, prioritized, made decisions, and practiced a bit of creative thinking. And then they were asked to take the worksheet home and talk with their parents, to see if their parents’ priorities were the same.  The students knew right away they wouldn’t be.

And all of this was prelude to reading City of Ember, the first book in a science fiction series by Jeanne DuPrau, a story about two young people frantically trying to save their crumbling subterranean city, powered for over two-hundred years by a hydroelectricity plant that is now breaking down. 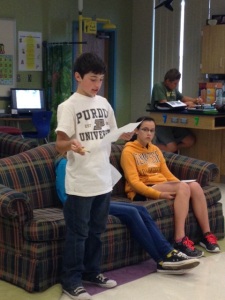 The other day, I watched a master 7th grade science teacher, Miss Kimberly Keesling, lead her class through a Fishbowl debate. Her objective was a universal lesson in critical thinking: Beware of loaded words and emotional responses. Ask questions. Do your own thinking.

She drew upon a well-known hoax from the 1990s in which scientific “evidence” was deliberately used to mislead the public.

Miss Keesling distributed facts sheets to the students—papers she’d prepared listing the pros and cons of banning a mysterious substance, dihydrogen monoxide—DMHO for short. The strikes against DMHO in the realm of health alone are pretty severe. It’s

On the other hand, DMHO is used

Miss Keesling gave the students five minutes to ask questions, study the fact sheets, and write out talking points on one side or the other. Then she took the pulse of the class. Those in favor of banning DMHO went to one side of the room; those against banning it, to the other. The Undecideds sat in the middle. She explained to the students that they were going to have a debate about DMHO, so they had to use facts. 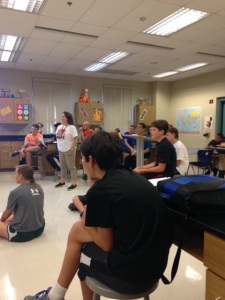 It took only a few minutes then to explain the rules of Fishbowl:

Middle schoolers love to talk, love to debate, and these students did so brilliantly. Their arguments for and against banning the mysterious substance were cogent and fact-filled. Some students were direct and succinct; others became quite animated. Within 15 minutes, just about everyone in the room had spoken. I heard impassioned and powerful statements and effective transitions such as these:

Sophisticated stuff for 7th graders. At the end, my colleague asked how many of the students had switched sides because of the arguments they heard. Some had.

Then she made the Big Reveal: DHMO is water. She broke the scientific words down into their roots and prefixes: di (2); hydrogen; mono (1); oxide. A few students caught on, clapped their hands to their foreheads: H20.

Why, she asked the students, had they come down on the side they had? All the claims and counterclaims are true—but they had been duped. Who had even asked what DMHO was before they began?  No one. What had swayed them? They had heard the facts, stacked on one side or the other as they were—all of them true, all of them convincing—and formed an opinion, often a very strong one. Why?

What followed were insightful responses that boiled down to this: The use of strong, emotional words such as kill, severe tissue damage, withdrawal, “greenhouse effect,” found in tumors… It was easy to be led to a conclusion.

And it’s not just scientists. These students were quick to point out that television, politicians, advertising—they’re all guilty of using emotional language to influence their audiences. Everyone needs to be vigilant. Everyone needs to think before they jump to a conclusion about something they know nothing about.

The Fishbowl strategy proved to be superior to recitation and far better than teacher questioning for a lesson like this. Because it was experiential, because kids were out of their seats moving and talking, because they took ownership of the lesson, they were engaged in the activity and Miss Keesling was able to make her point.

Granted, this particular lesson was a set-up. But the kids were good-natured about it. They understood the message and understood the value of it being learned in this way. In fact, the lesson will stick far longer than a paragraph in a textbook or a lecture by the teacher. But the method—a Fishbowl debate—was the perfect vehicle in a powerful lesson orchestrated by this experienced science teacher. Point made.

Fishbowl works for straightforward discussions about all kinds of topics. It’s especially useful if students are invested in a topic and eager to contribute, but even shy students will express their opinion when they can choose when to tap someone on the shoulder, decide for themselves when to take an inner circle seat.

https://www.facinghistory.org/for-educators/educator-resources/teaching-strategy/fishbowl  (Facing History and Ourselves) A straightforward explanation of how to set up a fishbowl discussion.

http://www.learner.org/workshops/tml/workshop3/teaching2.html (Annenberg Learner) A lengthier description with alternative ways of structuring the discussion.

http://www.edchange.org/multicultural/activities/fishbowl.html (Multicultural Pavilion) Another good explanation of the set-up for Fishbowl.