A few days ago, a young teacher (once upon a time,  a student at my high school) approached me after a workshop I’d conducted. “Tell me,” he said, “that I really did meet Gwendolyn Brooks when I was in high school. Her poetry has made such an impact on me.  She’s the opposite of me: black/white; female/male. She was old; I was young. But, I really connected with her. ‘We real cool’…She gets it. She really gets it.”

He was about to introduce her poetry to his 7th graders, so I dug through my personal “archives”—fat 3-ring binders with memos, schedules, programs evaluations, contracts, and photographs that I’ve kept all these years—and found a poster, a program, and a newspaper article from 1994 to help him recall the events of that day. The search took me back, too—refreshed my own memory of what was, for seven years, an extraordinary interdisciplinary, literary arts program in my high school. We called it Beyond the Pages.

Some snapshots from those days:

Beyond the Pages brought students face-to-face with authors whose work they had studied. In the library, in classrooms, in the halls, and even in the cafeteria, writers with international reputations talked casually with McCutcheon students, carrying them beyond the pages of their textbooks to interactions with the authors themselves.

The goal was simple: to spark students’ interest in reading.  National statistics showed then—20 years ago—that the percentage of students who read for pleasure every day dropped by half between elementary school and high school–from 45% in Grade 4 to 24% in Grade 12.  Beyond the Pages was a commitment to reversing this trend. 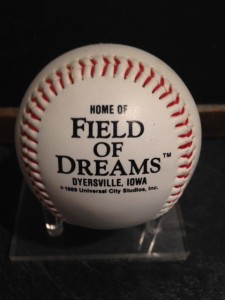 The program began with a dream.  The English curriculum already included W. P. Kinsella’s Shoeless Joe when I met the author at a writing workshop in (of course) Iowa.  After listening to Kinsella discuss his book, I approached him: “If we asked you, would you come?” He told me to contact his agent.

Dream became reality when the principal endorsed the idea and the English Department signed on to plan the visit.  The success of that first event spurred the decision to continue the program on an annual basis. Eventually, Beyond the Pages branched out beyond the English Department, becoming interdisciplinary and theme-related.  Not only did teachers in other departments incorporate the writer’s work into their lessons, but faculty from many different departments served on the steering committee.  Students were represented on the committee, too, and they helped with promotional activities, art work, and myriad details.

The authors were guests at the school for one to three days.  While they were with us, they participated in a variety of small group interactions and addressed the students in all-school convocations.  The format changed from year to year; activities were tailored to the writer and to the connection between his or her work and the curriculum. Delightful spontaneous events also transpired.

The program served 1100 high school students and 70 staff members, and each year the literary celebration expanded to include students and teachers from elementary schools within the district.  In 1993, for example, cartoonist Jerry Scott taught an auditorium full of 4th, 5th, and 6th graders how to draw the cartoon character NANCY.

Fundamental to the program’s success:

Teachers and students were given the opportunity to lead and the responsibility for the success of the program.

Teachers contracted with the artists, conducted the fund-raising efforts, organized the events, handled the publicity, planned the dinners, wrote the grants for funding, arranged transportation and accommodations for the authors, and conducted evaluations.  The Advanced Home Economics students prepared a luncheon for the guest author.  Students served on the steering committee, designed and printed the posters and programs, produced artistic displays, ushered, ran errands, and more.  The preparation for Gwendolyn Brooks’ visit took seven months of planning, 350 combined teacher hours of preparation, and the active involvement of scores of students—but it was done in a spirit of community. It felt like love, not labor. 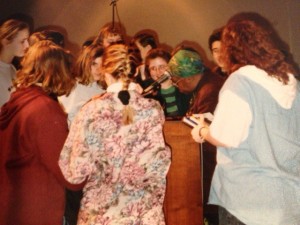 Beyond the Pages was grounded in the curriculum.

The program caught the imagination of the community.

The boldness of the project–inviting best-selling authors to a public school–captured the attention of the local media.  Newspaper, television, and radio coverage helped to spread the word beyond the school.  The program was even in the sports pages.  In 1992, Kinsella opened the baseball season at McCutcheon by pitching the first ball on the school’s own “field of dreams.”

Most years, members of the public were invited to attend an evening reading or a performance at the high school.  Attendance grew from 200 in 1992 to over 750 in 1994, the year that Gwendolyn Brooks spoke.  Beyond the Pages became a community event.

students. Indeed, English teachers saw an uptick in students’ understanding of how a writer works and an increase in their appreciation for books.  We provided students with rare opportunities to see professional writers at work and to ask questions about craft as well as biography.  One student wrote afterwards about Kinsella, “He taught me that writing takes a lot of preparation and time.”  Another student remarked that “it helps students write better if they understand how a professional does it.”

And individual students—like the young teacher who started me on this journey through my archives—were inspired and even changed by their interactions with the authors.

I’d be interested to learn about programs today in other schools in other places. Are author visitations still happening?  Who has come to your school? How was your program organized? What was the impact? Please respond in the comment box if you have memories from Beyond the Pages or stories to share about your own school’s program. I’m hoping events like this still go on.

I am a retired English teacher and Instructional Coach for secondary teachers in Lafayette, Indiana. View all posts by Sarah Powley

2 thoughts on “Beyond the Pages”