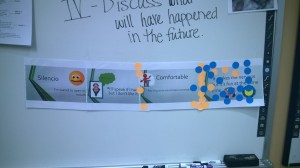 For teachers, August means the excitement of new students, new classes, new lesson plans–and the end of long mornings, lazy afternoons, and late nights.  For teachers in many school districts, August also means developing goals for the coming year–and then working all year to achieve them. In many districts, such goal-setting is a part of the evaluation process. To be successful, teachers must show not just that they did what they said they’d do, but that their goals had a positive impact on student learning. They need to demonstrate with data that students learned or that what the teacher did had a positive impact on student learning.

Sometimes, the goal is to change students’ attitudes. Quantifying an attitude shift–in a simple and direct way–is harder than, say, reporting the average percentage increase on vocabulary tests. This post is an update on a strategy I developed for documenting such attitude shifts. The update comes at the end and describes a speaking goal that a Spanish IV teacher in my district set and achieved.

A couple of years ago, in my capacity as an instructional coach for teachers in my district, I hit upon a use for Post-it Notes that involves measuring shifts in attitude. I wanted to know, originally, where the secondary teachers I was working with stood vis-à-vis implementation of the Common Core, and then, after I had finished with my professional development presentations on the subject, whether what I’d said and had the teachers do had had an impact. I wanted to know if what I was doing was changing attitudes.

How do you measure an attitude shift?

Furthermore, I wanted to share that information with the teachers.

How could I do that?

Somehow, I hit upon the idea, at the start of my Common Care presentations, of giving everyone in attendance a Post-it note (all the same color) and asking them to array their notes along a spectrum from left to right. I drew a line across the whiteboard at the front of the room and at strategic points along the line, I wrote the following summations of opinion:

The teachers had no idea that I planned to ask the same question again at the end of my sessions. They assumed my visual survey was just a way to assess prior knowledge (which it was) and take a reading on staff opinion (which it also was). They did not write their names on the Post-its and I didn’t watch while they affixed theirs to the wall.

When the workshop was finished, several hours later, I gave everyone another Post-it—this time in a different color—and asked them to do the same thing: Place their Post-it on the wall somewhere along the same spectrum. I deliberately turned my back so I couldn’t see who put theirs where.

Here’s what the Post-its revealed. (Pink is “before”; blue is “after.”) Of course, the response wasn’t universally enthusiastic—I didn’t expect that—but I was gratified to see that the overall shift was from left to right, proving, above all, that understanding something goes a long way towards supporting it. Or put another way: Education matters.

Since then, I’ve shown teachers who are trying to measure an attitude shift in their classes this same (quick and non-scientific) strategy, and it has worked for them, too.

For example, here’s one from a business teacher who wanted to know if her financial literacy course had made an impact on her students’ spending habits. She extended the concept to measure the shift in two classes simultaneously.

At the start of the term, the five points on her line were these:

In this picture, you see the results from two classes: one pink, the other yellow.  The spread on the bottom is the beginning of the semester; the one on top, the end. Notice the movement to the right in both classes–although the two yellow Post-its on the left represent the same two students, before and after. (Ah, well. Some people never learn.)

Because these Post-its would be up on the wall for the whole semester, we both assumed students would forget where they’d placed theirs. So the teacher had her students write their names on the backs of those little pieces of paper. That way, by turning them over at the end and finding their names, the students could see how far they’d come individually.

Last year, another colleague, a high school Spanish teacher,used the strategy to measure the development of her students’ comfort level with speaking Spanish. The purpose of learning a language is to be able to communicate in that language, but developing speaking skills is usually a challenge—for both the teacher and the students. Adults (and I’m counting high school students as grown-ups here) often feel inadequate when they open their mouths to speak in a foreign language. They know the words they use are basic, and the grammatical mistakes they make are embarrassing—because they wouldn’t make those same mistakes in their native language. So my colleague and I brainstormed a long list of opportunities, first just to hear spoken Spanish outside the classroom and then to interact with fluent Spanish speakers—a list of possibilities that grows progressively more interactive and engaging as the year goes along. Of course, the activities were a requirement of the course because her hope was that through authentic speaking experiences, students would become more comfortable—and ultimately more fluent.

To measure the students’ growth, here is the 4-point continuum my colleague used:

She planned to have the students chart their progress three times during the year: in August, in January, and in May. That meant three colors of Post-it Notes. Except that a good idea just got better! Fearful that after a whole year the Post-its would lose their sticky and flutter to the floor, my colleague wrote the attitude points on pieces of construction paper, laminated the paper, and had the students use large Avery dots to mark their progress.

The first time she had the students place their Avery dots on the continuum, we both experienced a minor panic. So many were already on the right hand side! Room for growth was minimal. Perhaps the problem could have been avoided by having a 5-point continuum. Perhaps it was something in the wording that yielded so many “3s.”

A little nervous about what a mid-year reading might yield, my colleague decided not to take a reading again until the end of the year. By the time she did, the students had forgotten all about the tally in the fall. During class, she sent her students, one at a time, outside the classroom where, they posted their new blue Avery dots. At the end of the class, when she looked at the results, she saw that every one of the students’ attitudes had shifted farther to the right. The goal had been achieved; the students had developed the confidence they needed to be, not just comfortable, but enthusiastic about speaking Spanish with native speakers.

This year, my colleague is expanding her list of activities and recruiting Spanish-speaking adults in the community–many, the parents of students in our school–to be the language partners for her students.

So here is my question: What attitude shift would you like to effect that the Post-it Note strategy could help you document?