“It was wicked cool.”

Ms. Ruiz’ students had read The Immortal Life of Henrietta Lacks, the non-fiction account by Rebecca Skloot of the journey of the cancer cells taken by researchers at Johns Hopkins in 1951 from a living patient, Henrietta Lacks. These cells produced a medical breakthrough: For the first time, human cells grew successfully under laboratory conditions. The cells continued to grow in the lab, and samples were shared throughout the world, enabling scientists to conduct experiments they’d not been able to before. The cells still grow today, though Mr. Pfledderer explained that they’re no longer pure because of all the work that has been done with them. In fact, he said, other cells are more often used today—bacteria and insect cells—to conduct research, but the HeLa cells, as they are called (for Henrietta Lacks), were the first.

The lab took two days to complete. On the first day, Mr. Pfledderer demonstrated the procedure for staining the HeLa cells so that they could be viewed under the microscope. He supervised as students dropped a suspension of cells onto a slide from a height of several feet, hoping that the force of the fall would break open the cell membrane and nucleus so the chromosomes would be available to stain. Then the students waited for the slides to dry.

This may have been the hardest part of the experiment. Waiting, blowing gently on the slide, and resisting the urge to hurry the process taxed their patience. “We need a hairdryer!” I heard one boy say. (Never mind that the force of air would have spoiled the slide; the printed directions clearly stated that heat should not be used to hurry the process.)

The next day, Mr. Pfledderer rolled a cart of microscopes into her classroom.  He reviewed the process of focusing the three lenses and reminded the students to move the slide—slowly—on the stage. “A tiny movement by you will be a giant move through the lens,” he explained.

“You won’t all get one,” Mr. Pfledderer had cautioned them the day before. “We hope some of you will.”

Hands waved, voices called out for the science teacher to look at the purple blobs the students discovered on their slides.

“That’s a floating piece of cell membrane,” he told one pair.

“Just a blob,” he told another.

“Yep! That’s a chromosome!” he congratulated one duo. With that, other students flocked to see the chromosome on their slide. iPhones emerged from back pockets and purses as students took pictures by pressing the aperture of the phone to the eyepiece of the microscope.

Henrietta Lacks was a poor, black woman, and her cells were grown and distributed without her consent or her living family’s knowledge. That fact has spawned controversy, for not only are the cells famous, but biotech companies have profited from using them. Until Ms. Skloot wrote her book, the Lacks family had received none of the profit.

The case poses important ethical questions for science: What obligation do researchers have to obtain consent for tissue preservation and use? Who should benefit monetarily from discovery and invention? In other words, who should profit from scientific progress?

Laws, in fact, were different in the 1950s, so Johns Hopkins—which has since established a scholarship in Henrietta Lacks’ name—did nothing illegal. The cells from a living cancer biopsy had grown unexpectedly, miraculously even. The goal was scientific research, and the windfall cell reproduction eventuated in discoveries related first to the polio epidemic that was sweeping the country at the time and later benefitted research into leukemia, AIDS, chemotherapy and gene mapping, to name a few. In short, many modern advances in science and medicine are indebted to HeLa cells and thus, in the point of view of some, to Henrietta Lacks.

The question is a knotty one with no easy or practical solution. Rebecca Skloot, the author, has established a foundation to support education and other needs for Henrietta Lacks’ descendants.

When the lab was over, Mrs. Ruiz asked the students to reflect on the experience. One student wrote, “To be honest, when I was looking at the cells, I didn’t think about the person behind them. I was just looking and feel like that is what the scientists were doing. They were just doing their jobs, like they did to all of the other cells in the lab.”

The student continued: “Yes, I believe that they [Henrietta Lacks’ family] should have gotten money because they were poor.” But, he asked rhetorically, “If they were rich, would you have the same feeling toward them not getting money?”

Another student wrote, “Doing this kind of made me feel bad because these cells once belonged to a woman who didn’t even know that people like 10th grade English students would be looking at her cells. Even though I felt bad about that, I still had a lot of fun and I think it was a very good learning experience. I also enjoyed how it connected English to science.”

And this entry: “I didn’t really understand what HeLa cells would look like until now. Would they look like normal cells? Would they look immortal? Monster like? Now that I have seen and witnessed HeLa cells, I know that they are just the same as yours and mine would be.”

Watching the lesson unfold, I could see that Mrs. Ruiz and Mr. Pfledderer had brought non-fiction reading to life and may even have sparked an interest in science that wasn’t there before. Students thought seriously and deeply about what they had read and experienced, and that is the goal of education. 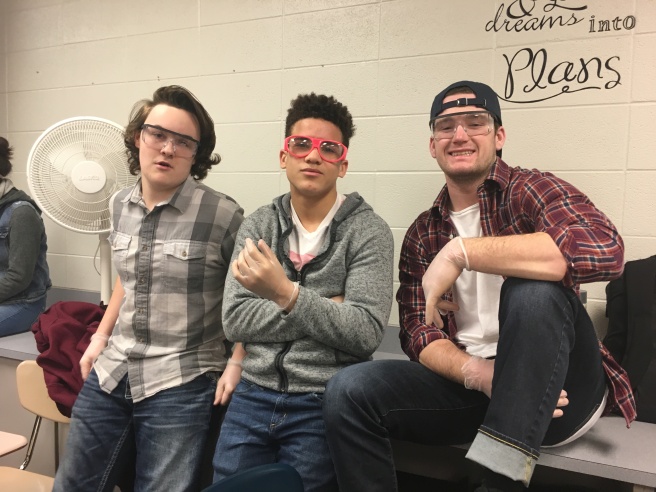 One thought on “Wicked Cool: Science in English Class”